The Independent Nurses Union of Houghton County has joined TPOAM. Please read the statement below for more information. 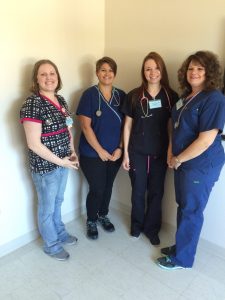 The registered nurses and the licensed practical nurses employed at the Houghton County Medical Care Facility in Hancock, Michigan have been independent for approximately ten years and fared pretty well on their own, thank you very much. The group’s leaders have educated themselves on many labor issues and never been afraid to represent members on legitimate causes. To assist them in their endeavors, including the negotiating of contracts, the unit hired a local attorney who did an adequate job, even with limited labor law experience.

But, in May 2016, the Independent Nurses Union jumped at the opportunity to affiliate with TPOAM. Local President Krystel Vater attended a recruiting meeting being held for other employees at the facility and knew instantly that TPOAM Upper Michigan Director Emil Kezerle would likely be a good fit for her group because of his extensive union knowledge and expertise negotiating contracts in the area. The fact that Mr. Kezerle had a positive experience representing nurses in Ashland, Wisconsin helped, but Vater was also attracted by the notion of full service, one-stop shopping for all union matters. Even though monthly dues are more than what the group was previously paying, the nurses are relieved that they have limited their financial exposure, and can now pursue all legal avenues in representing their members, without worrying about the expense.

The Independent Nurses Union Executive Board acted quickly after researching the data on TPOAM. Within two weeks, the unit voted overwhelmingly to join TPOAM. TPOAM Business Agent Emil Kezerle will start earning his keep immediately as he will take over lingering negotiations on last year’s wage reopener and kick start the TPOAM research team to provide comparables and other data as it relates to the Union’s contract that expires October 1, 2016.

If the other employees at the facility join TPOAM next month, Kezerle will be somewhat of a permanent fixture in the area. “I already represent the Houghton and Keweenaw County Deputies and Correction Officers, the Hancock Police Officers, and the Michigan Tech Police,” states Emil. “The nurses have always been engaged, but there is a lot of apathy with the other union and extensive training will be mandatory if we prevail in that election. But, I love the area and look forward to the new opportunities that are unfolding here.”

No Due Process Rights for At-Will E …

Lris At Will Employees